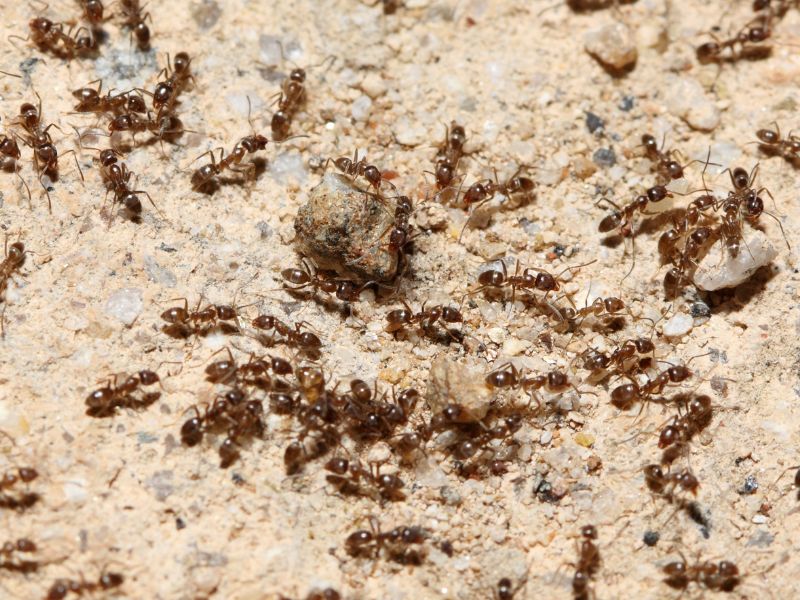 How do you save your worm bins from aggressive ants? To find the answer, we asked our summer college interns, Maddie and Kelly, to investigate. The worm bins at Solana Center recently experienced an increase in ant populations, possibly due to the decomposing food source and the moisture the bins provided. Although most species of ants will not harm the worms (other than depleting the worms’ food source), the ants in our worm bins were aggressive and ended up killing some of our worms. We researched a few options for discouraging the ants from getting into our bins and decided to test the different methods. The various methods primarily revolved around reducing access, using either vaseline, diatomaceous earth, or a water moat. The other method involved using a bait trap that was safe for humans.

One way to protect the worms is to create a barrier that the ants won’t cross. Diatomaceous earth is a repellent capable of killing ants which can be easily spread around your bins. The white chalk-like powder is derived from fossilized shells of diatom, an ancient marine algae. The diatom’s exoskeleton is made from silica which, as a powder, is a useful insecticide. When in contact with an insect, the diatomaceous earth will stick to their exoskeletons, leaching out and absorbing any moisture which will dehydrate and eventually kill the ants. Although chemical-free, this substance serves as an effective treatment for insect infestations. Due to our aggressive ant problem, our bins were overrun and the worms were under attack. By outlining the perimeter of the bin area with the diatomaceous earth, the ants were unable to enter the bins.

Another way to minimize access to the bin is to create an island surrounded by water. We used two methods. One way is to elevate the bin on top of bricks or blocks of wood (if it’s not already on legs) and place it inside a larger bin filled with water. If your bin happens to have legs like the one pictured, an easier solution is to fill four cups with water and place the legs inside the filled cups. The ants will not travel across the water so the worms will be safe.

You can also apply a sticky coating, like petroleum jelly or Tanglefoot, to the base sides of the worm bins to keep ants out. The layer of petroleum jelly will prevent the ants from traveling up and into the bins. The petroleum jelly protection will wear off, so periodic applications are necessary.

Like many pests, ants are attracted to sugary substances. Ants are specifically known to swarm sugary foods because sugar is extremely lightweight and high in calories. We decided to devise an ant extermination trap using the attraction of peanut butter and jelly-filled bottles. We filled plastic recycled water bottles ¼ full with a mix of peanut butter, jelly, and water, and drilled small holes halfway up so the ants could access the mixture. We placed these bottles a few feet away from the worm bins. The concoction is designed to distract the ants away from the worm bins by offering the ant colony a new food source. When the ants increase in numbers after a couple of days, we added boric acid into the water bottles to kill the ants. Boric acid is a natural mineral, also known as sodium borate, sodium tetraborate, or disodium tetraborate. The mineral is found in sediment known as evaporite deposits, concentrated after lakes undergo repeated evaporation. Boric acid is safe for humans and animals in small doses, however, the mineral fatally interferes with an ant’s digestive system.

If ants are attacking your bins, hopefully, some of these convenient, safe, and affordable methods.

This post was written by interns Maddie E. and Kelly B.

Posted in Soil & Compost, Worms
← From the Rotline: Why are my worms trying to escape?! San Diego County unanimously passes ordinance in support of organic waste processing! →