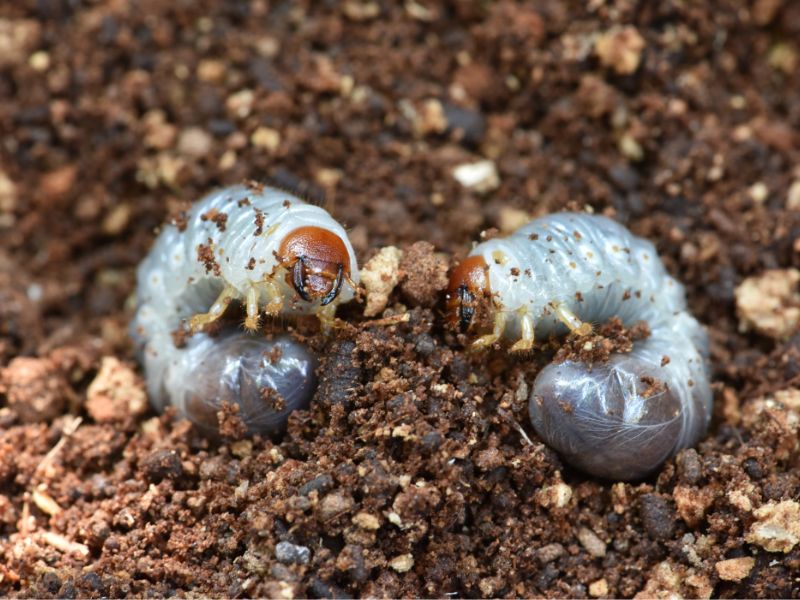 Many people are alarmed to find grubs taking up residence in their compost heaps, and the large population can worry some. Don’t worry, these guys are probably nothing to fret about. Most likely, they’re doing exactly what you want them do, which is EAT! They consume your organic matter and in turn leave you an abundance of nutrients.  The grubs are beetle larvae and there are several types that can inhabit your compost heap.

Large grubs like you describe are most likely the larvae of the big iridescent green Figeater beetle, Cotinis mutabilis, a noisy, bumbling aviator. The larvae feed on decaying matter so there is no worry that they will eat your plants.  The mature beetle feeds on sweets such as sap, flowers and over-ripe fruit.  The larvae can be up to two inches long with rows of bristles on their back.  They use the bristles for walking on their backs and are sometimes referred to as ‘Crawly backs’.  They are harmless to the garden with the adult green fruit beetle eating only rotting fruit, so you don’t usually have to worry about them being pests in your garden. More information about Figeaters can be found on the UC Pest Management website.

The Figeater beetle is frequently confused with the Green June Beetle as well as the Japanese Beetle.  The Green June Beetle, Cotinas nitida, is the Figeater’s East Coast Cousin and looks very similar as both an adult and larvae, but can damage the garden.  Fortunately, this guy only lives in the Eastern half of the USA.  The Japanese beetle, Popillia japonica, is an exotic pest that has caused a lot of damage on the east coast. The San Diego County Pest Detection Program places traps for them around the county in the fall as a part of a nationwide monitoring program.

Fortunately, these nasty hitchhikers haven’t largely established themselves in San Diego County. The larvae of The Japanese Beetle can be distinguished from the aforementioned beetles because it possesses a set of legs near the front of the grub. If you do come across them you should be careful to screen them from your compost. You can also pick them out and feed to the birds (chickens love them!). The larvae of the green fruit beetle (aka the figeater) are large C-shaped white larvae about 2 inches long with gray rear ends. The larvae are nicknamed “crawly backs” because they wiggle on their backs with their legs in the air.

If you still prefer to limit the larvae population in your compost, try burying your “Nitrogens” under a few inches of “Carbons” so the adult beetles and flies won’t be attracted to your heap. This will also help manage house flies and fruit flies.

Another common grub in a compost heap is the larvae of the black soldier fly, and it is also beneficial in consuming nitrogen-rich organic material such as your food scraps. You will find the larvae inhabiting the top couple inches in your compost. Young soldier fly larvae are a gray-white color, segmented, about an inch in length and very active. As they mature they turn a dark brown color. They are torpedo-shaped and flattened, with tough-looking skin covered in hairs and spines. The larval body bears no legs. The adults are also harmless. They live only a couple days, feed on your food scraps and lay their eggs in the compost.

Posted in Soil & Compost, Traditional compost
← From the Rotline: Is ink bad for my worms?Critters in Your Compost! (ID Guide) →