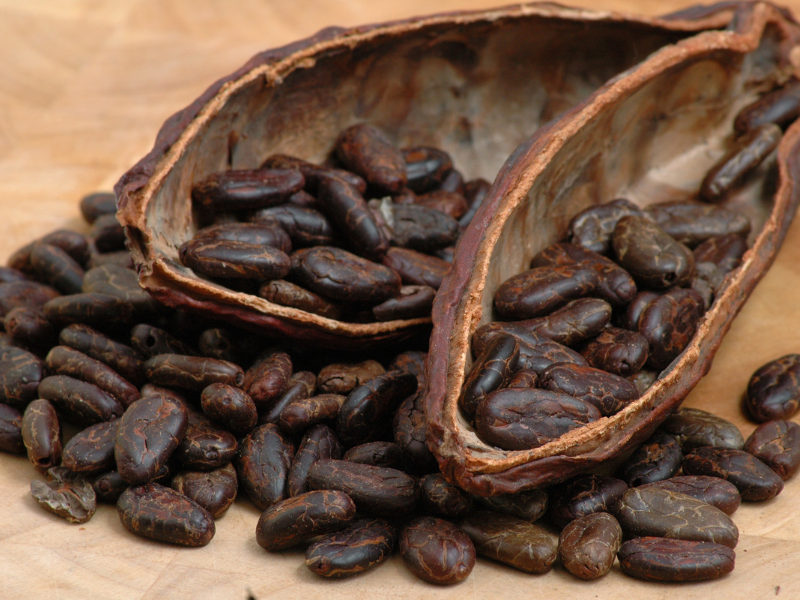 I’ve been at the Solana Center for some time now, and the staff here really seem to love coconut coir! They are always recommending it as an ingredient in potting and seed starting mixes and as bedding for vermicompost bins. Coconut coir is a highly useful and sustainable product, but sometimes humans ask a scary question… “Isn’t it toxic to my dog?” Yikes! Thankfully, this is all a big misunderstanding. I summoned the rest of the Solana Center dogs to help me get to the bottom of this mess, and my friends and I are ready to clear it up for all our human companions:

THE CONFUSION Coir is a byproduct of coconut processing- natural fibers extracted from coconut husks. Coconut coir is a safe product, but due to its name is often confused with a product that can be toxic to dogs and other animals: cocoa mulch. What’s the difference between them? The products are derived from two different plants: coconut coir is made from coconuts, while cocoa mulch is made from cocoa beans.

So, coconut coir is in the clear, but what’s the problem with cocoa mulch?

WHAT IS COCOA MULCH? Cocoa mulch is a byproduct of the chocolate industry. When cocoa beans are roasted, they separate from their shells, and the shells are then sold for use as mulch. It’s a widely available product that users claim has an appealing appearance, texture, and smell.  Just like other types of mulch or compost, it can add nutrients to the soil, suppress weeds, and help covered soil retain moisture.

WHY IS COCOA MULCH DANGEROUS? Cocoa mulch doesn’t just smell sweet to humans, but to other animals too. Dogs with indiscriminate appetites may be especially tempted to give it a taste. However, cocoa bean shells contain two chemical compounds derived from methylxanthines- theobromine and caffeine– that act as toxic stimulants in canine (and other animal) bodies.  Additionally, cocoa mulch may contain hazardous pesticides or mycotoxin-producing molds, which can create a variety of serious health problems in animals (and in humans too!)

WHAT HAPPENS IF A DOG EATS COCOA MULCH? The risks of ingesting cocoa mulch vary according to many factors, including the size of the dog, the amount of mulch eaten, and the level of stimulants in the mulch (which varies widely depending on the brand). Puppies and small dogs (like me!) are more vulnerable to health problems as a result of eating cocoa mulch. Symptoms usually occur within 6-12 hours of ingestion, and may include: (small doses) vomiting, diarrhea, restlessness, hyperactivity, excessive urination and excessive thirst or (large or chronic doses) increase in heart rate, muscle tremors and seizures. Remember, immediate treatment prevents the development of severe symptoms.

CAN COCOA MULCH INGESTION BE FATAL? Severe cardiovascular or neurological complications as a result of excessive or long-term doses of cocoa mulch have the potential to be fatal. While there are a number of anecdotal reports of canine death due to cocoa mulch ingestion, it is worth noting that to date, the AVMA (American Veterinary Medical Association) and ASPCA (American Society for the Prevention of Cruelty to Animals) have not received any cases involving animal deaths due to cocoa mulch ingestion.

WHAT SHOULD HUMANS DO IF THEIR DOG EATS COCOA MULCH? If you suspect that your dog has ingested the product, don’t panic. The odds of a severe reaction are low, but it is important to take your pup to the veterinarian as soon as possible. Call your vet or local emergency animal clinic immediately to report incidents of ingestion. The ASPCA Animal Poison Control Center can be reached at 1-888-426-4435. Remember, even if we do get sick, my friends and I are expected to make full recoveries with timely treatment. Whew, what a relief!

HOW CAN HUMANS PREVENT THEIR DOG FROM EATING COCOA MULCH? Don’t leave us unsupervised in areas where cocoa mulch is in use. Better yet, avoid applying cocoa mulch at all! After all, other neighborhood pets and local wildlife can be affected by ingestion, too! There are lots of mulch alternatives that are just as effective. Thanks for taking the time to learn how to make your backyard a safer haven for your dog! We want to show our gratitude by helping you do a little work in the garden: you didn’t really want to keep those new plants in such a prime digging location, did you? – Subi