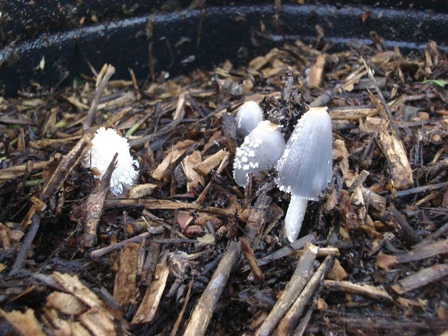 Fear not! Fungi are essential players in a functioning vermi-compost system. They are part of the food chain going on in your bin; while we often think that worms are directly eating our food waste, what they’re really after are the microorganisms that digest our food. This includes bacteria, which can break down simple carbon compounds like sugars; fungi can decompose tougher organic materials like cellulose and lignin. Because of their size, these organisms are rarely visible in your bin. However, you might see them if food isn’t buried and grows mold, or at times like this when you see a mushroom cap sprouting.

However, it’s worthwhile to point out that mushrooms indicate the presence of a certain type of fungi. These caps are the fruiting bodies (reproductive structures) of fungi that have filamentous (thread-like) structures called mycelium. Mycelium are kind of like the roots of a tree; they’re responsible for taking in water and nutrients over a large area. Mushrooms only grow when the fungus has reached the reproductive stage of its life cycle. Inside a worm bin, the constant tunneling action of worms usually breaks apart mycelium and prevents the fungi from reaching the reproductive stage. So, if you’re seeing mushrooms, that’s a sign that there’s limited activity in your worm bin. Make sure your worms are still there. If they are, it’s likely that cool weather is slowing them down. Check out our other blog post, Wiggling through Winter, for tips to keep your worms cozy during colder months!