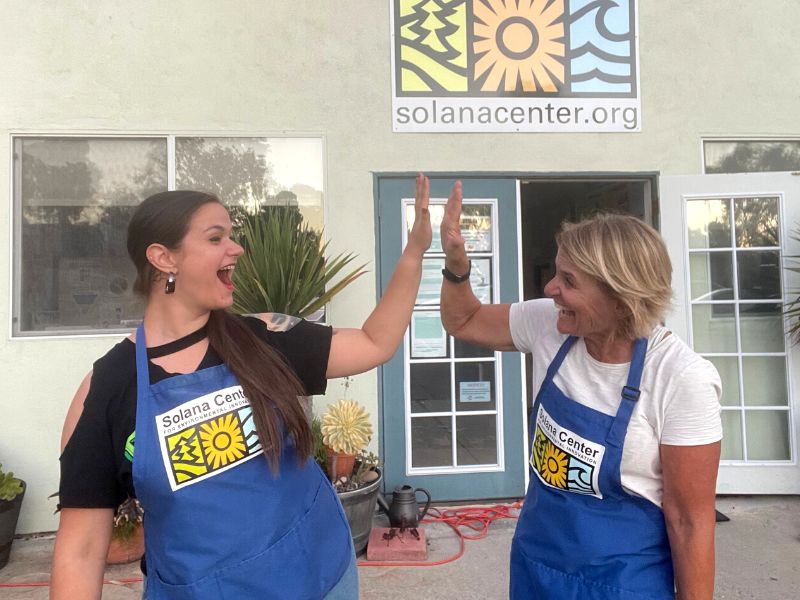 If you garden and compost, you know there are many physical benefits. Digging, hand tilling and turning compost piles can all increase your heart rate, offering a boon to your cardiovascular system. Weeding and planting maintain and improve hand strength. All that time spent outdoors tying up the branches of heirloom tomatoes and harvesting snap peas increases your vitamin D levels, which helps keep bones healthy and the immune system working optimally.

But did you know that gardening and time spent outdoors offer oodles of mental health benefits too? Here are three:

Breathing in the earthy scent of good soil has antidepressant effects.

That’s because of a soil bacterium, Mycobacterium vaccae, which gardeners naturally (and harmlessly) inhale while working in their raised beds and compost piles. M. vaccae’s antidepressant effects were discovered accidentally, when a London oncology researcher inoculated cancer patients with the organism, hoping that it would strengthen their immune systems. She noticed another effect: The patients who received the bacteria reported feeling happier and experiencing less pain than those who didn’t. Further studies showed that once it enters the body, M. vaccae boosts levels of serotonin and norepinephrine. Serotonin improves mood and boosts a general overall sense of well-being; norepinephrine increases alertness and energy.

If you’re a gardener, you don’t have to change anything to reap these benefits. Just working with healthy, organic soil will expose you naturally to this healthy advantage.

Rumination is the habit of going around and around the hamster wheel in your head, cycling, and recycling through the same thoughts and ideas. For years, researchers from all over the United States and Europe have been designing studies that measure participants’ mental well-being after spending time in green space. Study after study confirms that those with proximity to greenspace report less rumination, more positive thoughts, and greater general mental wellness.

Researchers have relied not only on study participants’ subjective reports of feeling better after nature exposure. They’ve also used objective measures, such as brain imaging, to determine whether parts of the brain that are most active when people are sad and depressed are switched on after nature exposure. Consistently, it’s been quite the opposite. Parts of the brain associated with sadness appear to be quieted during (and notably, for many hours after) contact with nature, while parts of the brain associated with positive thoughts and feelings become more active during contact with nature.

This is great news for gardeners, who essentially create and tend their own individual greenspace. As you know, even a small container garden becomes its own ecosystem, attracting pollinators and potential insect predators, growing in ways that can be surprising and unpredictable. And any garden, large or small, requires attention and interaction from the humans that have planted it. A Chinese proverb says “The shadow of the gardener is the best fertilizer.” Paying attention to your garden, spending time observing and reacting to needs as they emerge is the best way to keep your garden healthy and productive. Committing to a garden is essentially committing to ongoing contact with green space, along with all its attendant benefits.

Time in the garden enhances creativity and deepens spirituality.

One branch of psychology has long been interested in creativity, both in defining it, and in understanding what sparks and maintains it.

There are many different aspects to creative thinking, and the study subjects shared insights into some of them. The natural world, with its infinite variety, inspires exploration and openness. A garden is different every day, with changing light patterns, various growth, and diverse visitors, such as squirrels, butterflies, and hummingbirds. The curiosity and alertness that result in such an environment stoke creative fires.

This openness to various sensory stimuli—the bright colors of cosmos, the scent of sweet peas, the sounds of birdsong and bees’ buzzing—creates openings for the formation of new, different, even unlikely or wild ideas. The excitement of seeing something beautiful or unusual—a perfect delphinium with morning dewdrops on it, or a mass of ladybugs in motion—creates a sense of openness and playfulness that makes new connections between ideas and new perspectives on sticky problems more likely.

Time spent gardening amplifies creativity and creative problem-solving, but it can also deepen our sense of spiritual connection.

To learn more about the relationship between gardening and spirituality, Canadian researchers identified a sample of home gardeners, ranging in age from 32 to 80. Over a year, the scientists interviewed study participants four times, once in each season. Some of the subjects were religious, others were not, but all reported spiritual experiences as a part of their gardening.

Certain themes around connectedness emerged: connectedness to place, to nature, to the cycle of life, and to past and future time. As gardeners, participants felt connected to the circle of life, and recurring, dependable cycles of birth, death, regeneration, and rebirth. For many, that life cycle was the central core of their spirituality.

Connectedness through time provided both a sense of wonder and of comfort. Tiny chamomile plants that come up in the garden because you planted chamomile last year and let it go to seed offer a tangible, living link to the near past. Planting a tree that may outlive you provides a clear connection to the future. Ruth Bancroft began planting her famous northern California succulent garden (https://www.ruthbancroftgarden.org/) in her 60s—a clear act of both faith in the future and the belief that one’s gardening actions today can have a positive impact on who and what follows.

Some gardeners reported entering a flow state in the garden, where they lost track of time and even of their own physical boundaries, essentially becoming one with the plants and other life in their gardens. Many said that gardening outdoors gave them a front-row seat to the miracle of life, where unexpected and wonderful things happen, where a tiny, impossibly hard seed can take up residence underground and through some extraordinary alchemy become a four-foot-tall lupine. Those experiences of wonder and awe often felt spiritual in nature to study participants.

You probably already knew this: But the time you spend in the garden bolsters and enhances your physical, emotional, mental, and spiritual health. May you experience an abundant and wondrous 2021 in the garden.