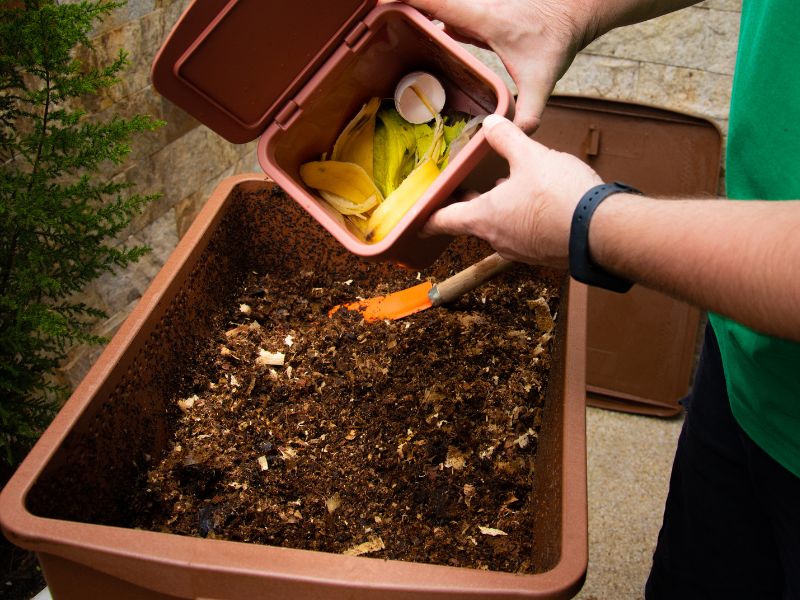 What is biochar?
Before the bins, compost thermometers, and subsidized compost vouchers, our ancestors buried char: wood, manure, or leaves cooked at a relatively low temperature in a low-oxygen environment over a long period of time, directly into the ground to fertilize the soil.

You may say “That sounds like charcoal,” and you’re right in a lot of ways. In a sentence, biochar is simply charcoal, made from biomass that’s partially burned in a low-oxygen environment and buried in soil. It’s the context of how this charcoal is used that makes the difference.

Biochar isn’t new, only the term is.
Biomass char has been around for 400 million years, since plant life and fire have coexisted. The word “biochar” itself has only been in circulation for a little over a decade. This char occurs naturally in soils around the world as a result of vegetation fires, and for a few thousand years, humans have been intentionally creating and using this dark, charcoal-rich soil to support productive crops.

Ancestors in the Amazon Basin in South America called biochar-enriched soil “terra preta” or black earth, and it still covers 10% of the Amazon Basin today. Although it doesn’t seem like it, jungle soil is usually very unproductive, and after mixing biochar with top soil, they discovered that the soil was able to retain its organic matter, nutrients, and moisture. This allowed annual cultivation of the same fields instead of using the traditional slash-and-burn methodology that was necessary to clear lands for new crops every few years.

The reason biochar works so well for soil is because the pores in the biochar give microorganisms a convenient habitat that shelters them from drying and predation while supplying them with a diverse source of carbon, energy and nutrients.

Where could I get it and how can I use it?
As tempting as it may be to go to your local grocery store, buy a bag of charcoal, grind it up, spread it across your garden, and call it biochar– that is not recommended. Most store-bought charcoals are briquettes that contain binders, fillers, and clay and glues to keep them from falling apart in the bag. These are often more likely to harm the organisms in your soil than help them.

The easiest way to get safe, garden-friendly biochar would be to purchase them from verified sources (check out SPV Soils locally in San Diego for bulk and bagged biochar.) You can also make biochar yourself like our predecessors– check out the links at the end of this page. This soil amendment isn’t just great for enhancing soil productivity and quality, however, it also can improve the composting process.

You can add biochar to compost? And it makes it better?
In a word: yes!

The relationship between biochar and compost is mutually beneficial and can result in: reduced composting times, a significantly reduced rate of greenhouse gas emissions such as methane (CH4), and nitrous oxide (N2O), and reduced ammonia (NH3) losses. When used in composting, it was observed that less nitrogen was lost to the environment, and more of it stayed in the compost. The biochar also acts as a bulking agent, with the porous nature of the biochar increasing aeration, which improves odors while further regulating the composition of the pile. The compost, in turn, assists in charging the biochar with nutrients that encourage the microbes living in your pile, and enhances the quality of the biochar.

Though biochar is a wonderful addition to compost, it is certainly no miracle agent and it is still highly recommended that you turn, add moisture, and monitor your pile as usual. It should also be noted that biochar is not considered a carbon– think of it more as structural housing for microbes and nutrients– however, the carbon to nitrogen ratio in your pile can determine how much biochar to add:

If you’re intrigued by the idea and would like to try making and using biochar yourself, here are some resources to get you going. Just remember, here in Southern California, to burn responsibly: if you choose to make biochar, stick to the wetter months of the year.